The Hidden Benefits of Canning the Commute

In a recent article, we revealed that 16 minutes is the optimum commute time for wellbeing. But there are other reasons to cut out the daily trek to work, including reducing CO2 emissions, bias against more remote job applicants and the gender pay gap. Matthew Jenkin unveils compelling reasons to ‘can the commute’

Whether you’re squashed like sardines in a crowded train or tearing your hair out in rush-hour traffic, there’s little to love about commuting. Yet, within a lifetime, many of us spend literally hundreds of hours getting to and from our place of employment.

It’s not just that time’s wasted. Some studies have found that commuting further than 31 miles each way may shave years off your life expectancy. Furthermore, if you take a bus or a train to work and the journey lasts longer than half an hour, the impact on your personal wellbeing can be detrimental.

Choosing a shorter commute should make us healthier and happier. A study of more than 1,000 workers in San Francisco found that their ideal one-way commute was 16 minutes. A 2018 survey by Time Out magazine even went so far to show that a short commute time (only 15 to 30 minutes – compared to the city’s average of 39 minutes) makes Londoners happier than sex.

In Japan, public transport is so efficient that if a train is late by just a few minutes, workers can get a certificate from the train company to give to the employer. While the country’s notorious train pushers, or oshiya, have no reservations in forcibly cramming passengers in the train before it leaves to ensure their commute runs like clockwork.

With flexible and remote working allowing more employees than ever the option to choose where and when they work, reducing the amount of time spent commuting is no longer just a pipe dream. But, apart from improving health and wellbeing, what other compelling reasons are there for cutting out the commute?

Could saying goodbye to commuting and embracing other options, such as local co-working spaces or working from home, close the gender pay gap?

It appears that taking a disproportionate share of childcare responsibilities means that many women are more likely to choose jobs in locations that are within a short 15-minute commute, according to the UK’s Office for National Statistics (ONS). On the flipside, the figures show that 61 per cent of commuters who travel for more than an hour are men.

The constraint on commuting longer distances is thought by economists to be one of multiple contributing factors to the gender pay gap, as women are limited in their choice of higher-paid work.

“If mothers consider jobs within a smaller locality than fathers, then employers will face less competition from other employers when hiring mothers than when hiring fathers,” say IFS researchers Robert Joyce and Agnes Norris Keiller. “This may give employers bargaining power and enable them to hold down the wages of mothers more than the wages of fathers.”

Embracing the idea of using a home office or flexible working space could help women access a wider pool of jobs without having to increase their commuting time. It’s a move that flexible working experts Timewise pushed in its 2018 report A Manifesto for Change. The co-founder of the organisation, Karen Mattison MBE, says employers need to catch up with the needs and aspirations of the modern workforce, or risk getting left behind.

And it’s not just the employee who benefits. Gavan Doherty, CEO of 247meeting, claims that workers who have been allowed to work more flexibly and reduce their commutes are noticeably happier and have improved output.

“When employees have pitched ‘working from home’ to me in the past, the first thing they’ll usually bargain with is the length of their commute and the implications of this on their work output,” he says. “Many will then go on to detail how this spills over into their family life as well. For me, that’s the kicker.

“Whether it’s spending more time with their children or caring for an elderly relative, you just can’t justify forcing someone into a long, arduous commute five days a week when this time could be spent on much more important personal matters.”

Not only will a shorter journey to work save money and boost wellbeing, it will also help reduce commuters’ carbon footprint. The average person in the USA drives more than 2,000 miles to and from work according to the 2009 National Household Travel Survey. Unsurprisingly, that has a big impact on the climate – every gallon of fuel burned creates about 20 pounds of CO2, so reducing the miles your vehicle travels can lead to significant emissions reductions.

With a majority of US workers claiming they would be more satisfied in a job where they can make a social or environmental impact on the world, and a recent Fortune.com study showing that Millennials in particular see businesses as potential partners in helping them make the world a better place, the pressure for employers to look for greener ways to work is definitely on. 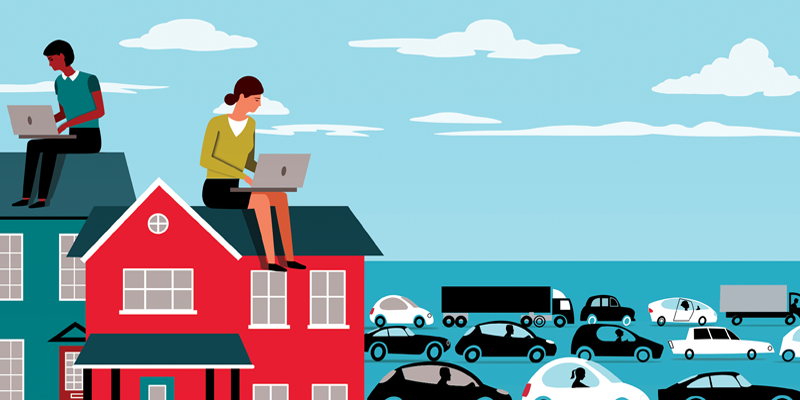 Spending less time time commuting and more time engaging in activities which enrich our lives, not only makes us happier, it can improve both mental and physical health, and even make us better at our jobs.

For example, studies show that exercising more in our free time can not only boost out memory, it can improve concentration. Not to mention reducing stress.

While a study from The University of North Carolina has shown that the key to a long, healthy life is really all about having good friends. The research found that people with good, supportive relationships tend to have lower blood pressure, a smaller waist circumference and body mass index, and lower levels of inflammation than those without these positive social ties.

Although one of the advantages of a long commute on the bus or train is being able to take a quick power nap, research shows spending too much time travelling to and from work has a negative impact on sleep.

When comparing data from the US Census American Community Survey (2012-2016) and the CDC’s 2014 data on sleep deprivation rates by state, researchers at sleep advice website Tuck found there was a correlation between long commutes and lack of sleep.

Meanwhile, a study of 21,000 workers in Sweden and a study of commuters on the Long Island Rail Road found that people with long commutes sleep less. Economist Thomas James Christian analysed data from the American Time Use Survey and also found that people who spent more time commuting consistently spent less time exercising, sleeping, and making food at home.

Although it is possible to feel some benefit from a short nap on the train to work, experts agree that nothing beats a good night’s sleep for both physical and mental health.

“It is important to acquire deep sleep during the night because this stage of sleep has been shown to be more restorative for metabolic and cardiovascular function, as well as for learning and memory,” explains Dr. Phyllis Zee, director of the sleep disorders clinic at Northwestern University Medical Centre.

Work and marriage don’t always go together like a horse and carriage, especially if one of your commutes is too long. According to at least one study, if one spouse commutes longer than 45 minutes, a couple is 40 per cent  more likely to get divorced.

But that doesn’t mean those relationships are doomed. If you’ve already spent five years or more commuting more than 45 minutes, then you’re only one per cent more likely to get divorced than couples with short commutes. In all likelihood, that’s because you’ve worked through the practical and emotional issues involved. Plus, if one of you had a long commute before you started your relationship, then you’re also a lot less likely to get divorced than husbands or wives who start a long commute later in their relationship.

HubSpot co-founder Dharmesh Shah suggests several reasons for the link between commuting length and marriage happiness, such as the time taken away from each other and the increased stress of travelling long distances – leading to tension in the home.

Indeed, a 2001 study by Norbert Schneider a sociology professor at the University of Mainz in Germany, found that the majority of long-distance commuters (60 per cent) and their partners surveyed complained they often had insufficient time for spouses and children. Quality time together was reserved for the weekend or holidays only.

While studies suggest that few workers want to ditch the commute completely and solely work remotely or from home, most people agree that there are ways to either reduce their commute or use it to increase their happiness and be more productive. So, with advances in technology and the traditional office 9-6 model increasingly looking like a relic of the 20th century, there is hope that the days of exhausting long commutes are also numbered.

Matthew Jenkin is a US-based journalist and the former editor of Guardian Careers, The Guardian newspaper’s community site for job seekers and career changers.