Adjust the lighting, buy a plant, stand up, grab a nap, get sporty… and look at pictures of cute kitties. Believe it or not, scientific research says they can all increase productivity in the workplace. By Libby Plummer

1. Head towards the light

There’s a reason we’re all keen to grab a coveted window seat – or at least try to avoid being lumbered with an office in the basement. Workers in naturally lit offices reported an 84-per-cent drop in symptoms that negatively affect productivity, according to a recent study from Cornell University(1). These symptoms include things such as eye strain, headaches and blurred vision, all of which are associated with working in dimly lit conditions.

However, not all window seats are created equal. With some traditional panes, uncontrolled natural light can cause distracting glare and unwanted heat. This means that they’re often covered with blinds, leading to poorly lit workspaces. The research compared the experiences between workers in offices with traditional windows and those in offices with auto-tinting smart windows that adapt to control natural light. There was a 10-per-cent decrease in drowsiness among the workers in the office with smart glass, while those sitting close to these windows saw a two-per-cent increase in productivity.

2. Stand while you work

Beat the 3pm slump, literally, by ditching your chair and standing up straight – ideally at a standing desk. Researchers at Texas A&M University(3) looked at the differences in output between two groups of call-centre workers over the course of six months and found that those with desks that could be raised or lowered on demand were a staggering 46 per cent more productive than those with traditional sitting desks.

They also found that nearly 75 per cent of those working at stand-capable desks reported decreased discomfort after using the desks for six months. And the good news is that you don’t have to stand up for very long for it to have a positive impact on your work. The research found that those using the stand-capable desks only sat for about 1.6 hours less per day than the seated workers, suggesting that standing for just a small amount of time can make a big difference.

Caught asleep on the job? Tell your colleagues it’s for the good of the company. According to research from the University of Michigan(4), taking a nap could be a good way to boost your tolerance for frustration and enhance your ability to persevere through difficult or frustrating tasks. The study found that those who napped were less likely to quit a set task than those who didn’t. 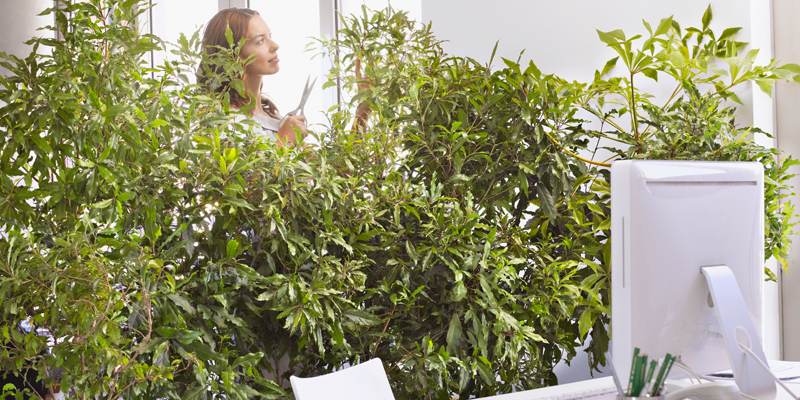 A little bit of green can do you the world of good, with plants shown to boost output by an impressive 15 per cent, according to a study led by researchers at Cardiff University’s School of Psychology(2). They looked at two large offices in the UK and the Netherlands, and the impact of greenery on staff’s perceptions of air quality, concentration and workplace satisfaction. They also monitored their productivity levels. The researchers found that employees in offices filled with plants were more physically, cognitively and emotionally involved in their work. Previous studies have suggested that greenery adds to a sense of wellbeing, but this is one of the first to investigate the issue in a real-life office setting. Pop a pot plant on your desk to reap the benefits.

It’s widely accepted that regular exercise keeps you mentally and physically fit, but did you know it can also have an impact on your workplace productivity? The key is to opt for a team sport, rather than a solo activity, as this can increase team cohesion as well as work performance, according to researchers at Loughborough University(6). In a study, they investigated 18 previous papers based on the various benefits of workplace activity, and found that sports such as rugby, football, swimming and table tennis could enhance office productivity and also lead to reduced sickness costs. The researchers said that joining an office sports team is a great move for those who struggle to fit in time for sports around their work hours.

Do hilarious cat videos and dog-based Twitter memes have a place in the office? The answer may surprise you. Far from being a frivolous waste of time, looking at cute animal pictures could actually boost output. In a study on the effects of ‘kawaii’ – the Japanese word for cute – researchers from Hiroshima University(7) found that looking at sweet pictures can actually improve concentration and dexterity. Their tests showed that there was as much as a 44.9-per-cent increase in speed, accuracy and dexterity when participants were asked to carry out tasks after looking at cute baby animal photos. For another group viewing non-baby animal images, the increase was much lower at just 11.9 per cent.

How to create a high‑performing remote team

How to deal with videoconferencing fatigue