Choose from over 10 locations in Southfield.

Our hot desking solutions in Southfield are designed for agile working, allowing you to choose between a reserved or unreserved workspace, depending on your needs. A great option for freelancers, start-ups or SMEs, Regus co-working space in Southfield helps you to maximise productivity.

The residential suburb of Hyde Park is one of the most historic parts of Austin and hosts numerous graduates at a top ranking university.

Home of the city’s international airport, O Hare is a major hub and it also forms part of the bustling Golden Corridor commercial district.

Home to foreign consulates and Philadelphia’s tallest building, Centre City is also a chosen location for Comcast, Cigna and Sunoco.

About co-working space in Southfield

A shared office space in Southfield provides you with a flexible work solution which also allows you to network with like-minded individuals in the area. Shared offices are a smart choice for those searching for an affordable way to establish a presence in the vicinity, alongside companies looking to expand. With a coworking space at one of Regus’ centres, you can enjoy additional benefits, which include meeting rooms available for rent, office cleaning, a kitchen area with tea and coffee facilities, and high-speed Internet. You have the option to choose between hot desking set up, with desks allocated on a first come, first served basis, or reserve a permanent workspace.

Southfield is a city of 75,000 people in the northern suburbs of Detroit, Michigan. In addition to being a major business center in the metropolitan Detroit area, it is also the broadcast and media center for the latter, boasting broadcast facilities and studios for several different television stations. The wide commuter belt also makes it easy to travel regularly into the destination for employment, while Detroit Metropolitan Wayne County Airport is just a 25 minute drive away. Several prominent companies are based in the vicinity, such as Fifth Third Bank, Sumitomo Corporation, Online Trading Academy, Denso and Lear Corporation, alongside several Fortune listes businesses. 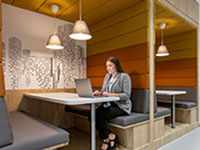